Before we take up the several properties of a triangle, typical and subject-oriented, we will, at the outset, encapsulate the more general and common ones that occur to an untrained mind, without portraying much the attending interest, labour and the need of a math student.

A triangle is a figure of three sides and three angles. More precisely, it is a polygon.

A triangle has six elements or parts. They are the three sides or arms and the three angles.

A side of a triangle is formed by joining any two points. A side is therefore a straight line.

Therefore, a side is length of the line segment joining any two points or distance between the two points.

Any two sides intersect at a point. The point is called a vertex. Thus, the three straight lines that a triangle is made of intersect at three different points.

The points of intersection of the sides are called Vertices. Therefore, a triangle has three vertices. Normally, the three vertices of a triangle are denoted by capital letters such as A, B, C or X, Y, Z or P, Q, R or any other triplets of letters written in capitals.

Triangles have areas and perimeter. Area is the total space contained inside the triangle which sum of the lengths of the three sides is the perimeter of the triangle.

The three sides and the three angles may be of equal lengths and measures or different.

Triangles are classified based on two factors. One is side, and the other is angle.

As said earlier, an angle is formed when the two sides of a triangle intersect each other at a point, called the vertex.

Angles are measured in degrees, radians and grades.

There are three major types of triangles classified under each of sides and angles.

Under the heading sides, the three major triangles are:  Scalene, Isosceles and Equilateral.

Under angles, they are: Acute angled triangle, right-angled and obtuse-angled.

In an acute angled triangle, all of the three angles are of different measures and every angle is less than 90 degrees.

The celebrated pythagorean theorem applies on a right-angled triangle.

A triangle in which one angle is obtuse, i.e. greater than 90 degrees is called an obtuse- angled triangle. The side opposite to the obtuse angle is longest in the triangle.

In a triangle, angles and sides respectively opposite to each other are proportionately related. In other words, sides opposite equal angles are equal in lengths. And, the side opposite greater angle is longer than that opposite a smaller measure of angle.

The sum of the angles in a triangle is equal to 180 degrees.

With this overview, now let us delve into the specific properties in greater depth, the kind required for a math student.

Sum of the angles in a triangle is 180 degrees 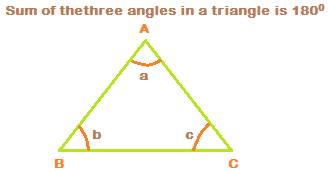 In the above triangle ABC, denoted as

, A, B and C are the three vertices formed by the intersection of the three sides AB, BC and AC.

are formed at the three vertices by the three sides AB, AC and BC.

is formed at vertex A, the point of intersection of the two sides AB and AC.

is formed at vertex B, the point of intersection of the two sides AB and BC.

is formed at vertex C, the point of intersection of the two sides AC  and BC.

Exterior angle of a triangle

The exterior angle of a triangle is equal to the sum of the two opposite interior angles.

, one side BC is extended upto point D. Because of this, an angle is formed at vertex C from outside. This is called exterior angle. In the figure above, it is

Note that angles c and x form a linear pair of angles. Therefore,

Angles opposite sides of equal and different lengths. 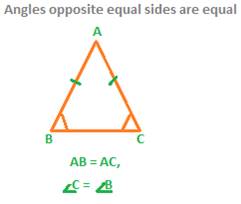 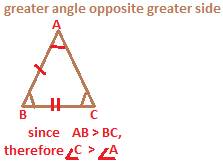 In the above figure, Side AB is longer than the side BC.

Since AB > BC, therefore angle C > angle A

The square of the length of hypotenuse is equal to the sum of the squares of the lengths of two sides containing the right angle.