Slope of a straight line:

One of the properties of a straight line is slope.

Then, the formula for finding slope of the straight line is

Slope is denoted by the letter ‘m’.

It appears from the subscripts used for the coordinates that there is a first point and a second point. But, this is purely a misgiving. You do not have to assume of any such convention.

The coordinates of any point serve to be taken as x1, y1 and those of the other as x2, y2.

The value of slope does not change even if the formula were written as follows:

But, there is a caveat. And it is

In simple words, do not make the following mistake in finding slope: 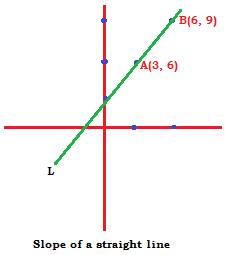 Applying the above formula, the slope is

Alternatively, the slope can also be found as

Consider the following general form of equation of a straight line

The slope of this straight line is

Consider the straight line whose equation is

This equation is said to be in general form.

Therefore, its slope is 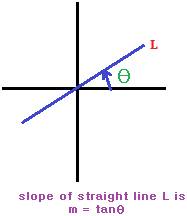 Then, slope of the straight line is tanθ

Top
Next Lesson - Application of Slope